Infrastructure developments in cities & other urban areas are vital to the progression of Scotland as a functional state. There are so many things that infrastructure ties into that it makes it incredibly relevant to more sectors than you might think.

From hospitals, schools, university campuses to new offices, urban developments act as a push in the right direction for the growth & progression of a modern Scotland. Since 2017, there has been over £6.4 billion worth of urban infrastructure developments that have been put in place.

The Scottish Government’s Infrastructure Investment Plan report highlights that many of these projects are on schedule to be completed in the next few years. Developments like the Queensferry crossing & several motorway improvements across Scotland have already been put into place, delivering the associated benefits to the people of Scotland for decades to come.

Scotland’s main railway infrastructure is also due to be developed further, with many main routes being re-developed to improve functionality across the Scotland route.

Network Rail Scotland looks after Scotland’s railway infrastructure, making sure that funding is being put into the appropriate places to keep the infrastructure running well. There are always things to refine, regardless of what type of urban development you analyse.

Scotland’s railway is vital to the country’s economy, providing essential links between communities, employment, industries and markets. After the huge re-development in 2015, there have been 7 additional stations added as well as 30 miles of new track added to the infrastructure. This makes the Scottish route the UK’s most developed domestic railway in the past 100 years. These developments have benefited Scotland greatly, vastly improving rail travel for passengers nationwide.

Developed lines in the past 5 years:

In CP6, Network Rail Scotland will explore further opportunities for third-party investment. They want to focus on funding from local authorities, working with them to collaborate & build successful relationships in order to push future railway enhancements. NRS are looking for opportunities to align asset renewals & enhancement works to bridges with road authority schemes. This has the potential to unlock shared benefits and reduce maintenance costs in certain areas.

When you take a look at the future of Scotland, it’s clear that modern developments like this either to add or to re-develop existing infrastructures are the key to progressing Scotland as an economically effective country. Glasgow is a huge focal point and has been for the past few years due to the number of developments that the city has seen. Developments like the Queen Elizabeth University Hospital, costing just under £1bn is now the largest critical care complex in Western Europe. The Pacific Quay Digital Media Quarter is also a recently developed site that is at the forefront of growing societal trends. The Digital Media Quarter features the most advanced broadcasting facilities in Europe, something you wouldn’t expect!

Edinburgh is also going through an exciting period in terms of urban developments, with 140+ new developments worth £11b+ that is either underway or has been proposed. This is growth that the city has seen in 2019 alone, which goes to show how much potential even a fairly developed city has.

Some large developments that are worth mentioning are:

St James – Mixed-use development with project costs of £1b. The St James development is expected to comprise of 80,000 m² of retail & leisure space, made up of 86 retail units & 27 F&B units. The site will also feature a 253 room W Hotel, 75 room Roomzzz Aparthotel, a 5-screen Everyman Cinema as well as 152 additional homes.

The St James site is already in construction, with the retail portion to be finished in 2020 & hotels, cinema & residential areas due for completion by 2021.

New Waverly will also make use of the former infant Canongate School, a C-Listed building. It will also be the home of the Edinburgh Gin distillery which will also feature a visitor centre. The New Waverly development is set to be completed throughout 2019/2020.

Check IT Group are a leading scaffolding provider that provides scaffolding across Scotland. We’ve worked with hunderds of urban developement sites in the past 20 years, helping Scotland to become the great country it continues to be. From built up urban sites to railway developments, we’re equipped to work with any developers to achieve their goals. Check IT Group have been the go to provider for scaffold hire in Scotland for decades.

We customize our scaffolding services to meet the needs of each specific project. Scaffolding services from Check-It Scaffold Services are available virtually anywhere in the world. The following are areas in which we regularly provide services: 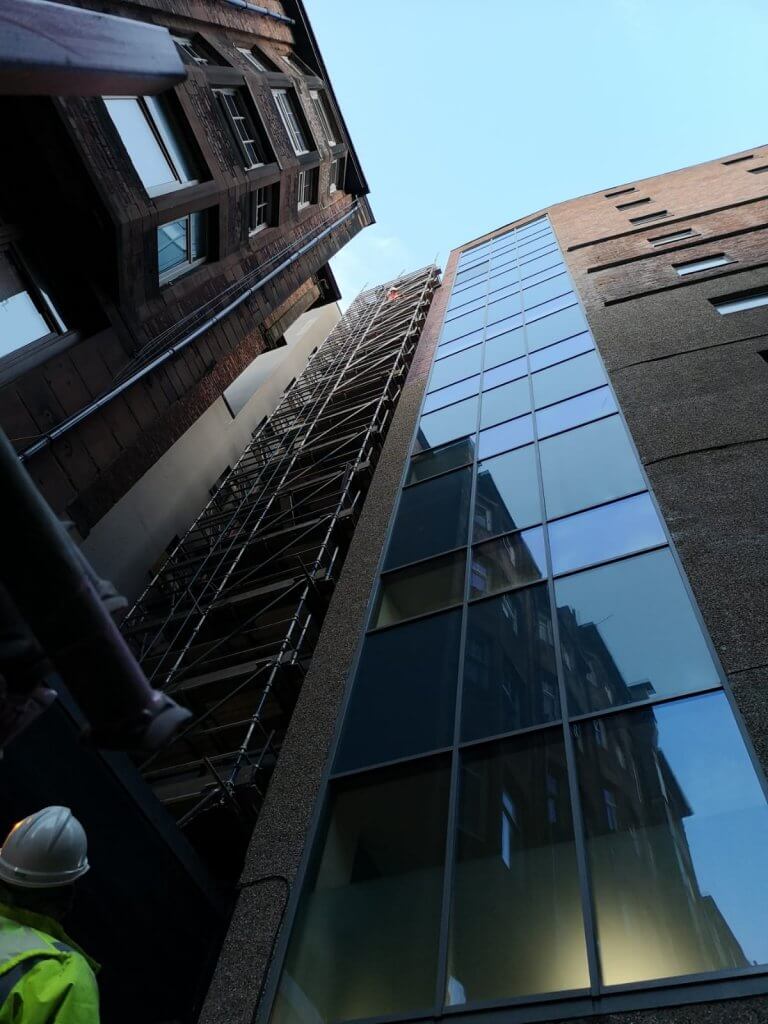